I don’t know about you, but I often dream of moving to a house by the sea. Actually not just any house, but a particular one. It’s in Torcross in Devon and I used to look at it with longing every year when I went on holiday there with my mum and dad. Just to clarify though, I wouldn’t say ‘no’ if a house came up somewhere that was hot and sunny all year round. However, as much as I think and dream of greener grass, I think that I’m very lucky to live where I do. Lincoln is (as a whole) a beautiful city.

There’s the historic cathedral quarter which isn’t just home to the cathedral, which is 4th biggest in the world (and I think the best!), but also the castle and cobbled streets. Little boutiques and great places to eat, wherever you look there’s something to draw you to look further, and whenever I get the chance for a wander around the bailgate I feel proud, it doesn’t matter if it’s raining, or the streets are bathed in sunlight or the christmas lights are twinkling, it’s just lovely.

Further into the heart of the city is the Brayford waterfront. A place that over the years has been lucky enough to have money pumped into improving it. Not only is it close to the university campus, but as people make their way down the hill into the more modern high street, it is an attractive place to take some timeout. After years of hard work (and complaints – constant complaints about the buildings) it’s gone from what I remember as a child as ‘a bit of a supermarket’ to a modern place full of restaurants and bars, and of course the cinema.

See Boats and twinkly lights. Oooh and the beautiful cathedral towering above.

Sadly though, as lovely as the city is, it’s not all beautiful. Not only are there some questionable buildings (I’ll come to those later), but posters stuck in windows, people standing holding large signs and banners draped over beautiful buildings or tied to railings, promoting bars and restaurants. Things that in my opinion go against the vibe that we are trying to project when competing with other cities such as Bath and Durham.

In a recent survey a huge 48% of people said that ‘they felt the eyesores influenced visitors’ opinions of an area’. That is a huge figure! Especially as tourism combined with the university is so important to Lincoln.

It’s taken some time, but from my understanding, after a lot of work, the university has mostly been embraced by the locals of Lincoln. It’s integrated nicely into the community, and I feel it’s contributed to the nice buzz which is part of the city. After all, and remember this for later, it’s helped the city grow.

Just to clarify though, I don’t think the university itself is ugly – actually I think it’s rather lovely. See.

Looking at the picture above, a building which fits into the surroundings so well, I do question some of the decisions for the additional buildings – especially some of the student accommodation (on university bridge who designed that?!) and (ironically) the architecture wing. To me it looks more like a cross channel ferry than a building we should be proud of.

While we’re questioning decisions, I can’t help wondering why nothing has been done about this bridge which leads to the university campus and Tower Bar. 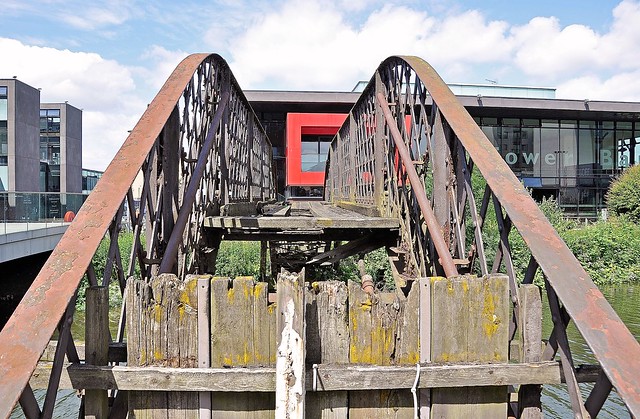 I’m sure it’s listed or something, or maybe people think it adds some culture, but this area is so vibrant, and there, next to the modern bridge driving people to the university, is this decaying, decrepit, dangerous looking eyesore. Surely something could be done to make it better?

But anyway. You know how I was saying that the university and the locals have integrated nicely? Embracing one another? Ironically, as I was typing the first draft of this post on Thursday, it was announced that ‘Locals will have to be signed in by students at Lincoln Tower Bar‘ Now for those of you who don’t know Lincoln – this is the Tower Bar.

Not too shabby actually. The Tower Bar is attached to The Engine Shed, which has brought some great acts to Lincoln (we saw Jon Richardson the other month – HILARIOUS). Anyway, it’s not like I go there often, for no reason other then I obviously have no life now I have the kids, but I know a lot of “locals” who do. It’s a nice bar; it’s got a good feel to it, and has a good atmosphere. The drinks are reasonable, and it’s close to other parts of the city. When you go to see an act at the Engine Shed, the Tower bar is the obvious choice to have a ‘pre-gig’ drink, and meet the rest of those in your group.

To say I’m disappointed about the announcement is an understatement. I’m unsure how it will ‘improve student experience’ as they’ve been quoted saying. I appreciate there are student only bars – never really got this, can students not deal with the real world yet? Is it too much to have to talk to people who aren’t in the educational system? Anyway, the fact of the matter is, there is a student only bar very close by, I believe it’s called The Shed. So why do they feel that this is necessary?

What I can say straight away, is that it’s not going to ‘improve visitor experience’ for those going to The Engine Shed to see an act. “Oh, let’s pop into the bar which is attached to the venue” “Sorry you’re not allowed, you’ll have to go back over the bridge, all the way over there to that bar” “But we’ve only got half an hour” “sorry, students only”. Shooting yourself in the foot much? Great way to draw people in.

On Twitter I made a flippant remark. See my quote here.

At the time I didn’t actually mean it, I was joking, pointing out the ridiculousness of the situation, but it got me thinking. Obviously there’s the financial element in the bar (what happens when all the students go home for the holidays?)  but also, If the students are alienating us, will that not cause a bad feeling within the city?

Will the buzz of day-to-day life, the upbeat atmosphere die down completely? The University brings and keeps people. It adds culture and socialising opportunities, research and enhanced education.   Students want to get jobs in the city, probably in pubs. By  alienating the locals and keeping the students at the uni, will people “away from the university” not feel less inclined to offer the jobs to the students? It’s a bad move. Will it actually not just be the odd eyesore that will put people off? Will it not be the atmosphere? After all, if a place doesn’t feel friendly and inviting people aren’t going to want to visit are they?

By undoing all the hard work to develop Lincoln into a city that people want to visit, by making changes like this, are we (or they!) shooting ourselves in the foot? Because if nobody visits the city, if the tourists drop off, we’re not going to be able to develop it any further. Lincoln has one of the few high streets where spending is increasing – all the more reason to get rid of the tacky banners before they put people off coming back.  I’m not stupid, I know that more students equal more spend. I know that they’re the main reason I’m crossing my fingers that H&M may actually happen in the Waterside Centre, but it is important to integrate. So important.

Perhaps, I don’t understand the necessity of student only areas (other than, you know the student only bar and the majority of the university) , but if there really is a need maybe my flippant remark wasn’t quite so ridiculous – after all if you need your space don’t we need ours?

Perhaps we do. But if I’m honest, I don’t want that. I don’t really give a toss who is a student and who isn’t. I want my H&M dammit (and a Zara and Mango wouldn’t go a miss either if anybody of relevance is reading this), and I’m sure whoever you are , as you’re reading this right now, and you live here, there are things you’d like to change. An outdoor swimming pool? More parks? Retail opportunities, restaurants, and businesses, derelict empty shop and units filled?  None of that’s going to happen if we alienate the people who can make that happen.

To conclude, yes we have a few eyesores, like every other city, but there’s an opportunity that we can slowly rebuild parts of the city. But only if we think of the bigger picture, and don’t knock down the atmosphere.

3 Responses to Atmosphere before eyesores