When you’re part of the Bad Mums Club – FOOD

Argh, I’m a Bad Aimee.  I’m meant to be HOSTING this months Bad Mums Club, but instead, I forgot I was on holiday, in Lanzarote, in the sun. So instead the lovely Alison is hosting it, because I’m in the sun, sun, sun, sun,

Sorry. It will probably rain now.

Anyway, this month I want to talk about food.  Not about the nightmares of forcing fruit and veg into The Chunky Monkey, nor about “Yogurt Gate” (who’d have thought a Peppa Pig yogurt would cover quite such an expanse of lounge sofa/carpet/coffee table?), not even how whatever you have on your plate, even if it’s the same as theirs, they want it (except yogurt). So what do I want to talk about? What part of food could possibly make me a bad mother?

My favourite foods that I don’t eat, that’s what.

Now I’m in my thirties, I have to watch what I eat a little bit more (this is a lie, I’ve had to watch it all my life, I have no self respect when it comes to certain food), therefore there are certain meals I just don’t eat, or if I do, I don’t eat them as often as I would like. 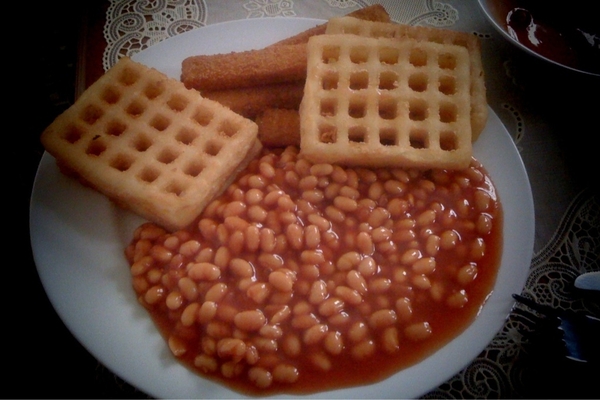 Image from www.mobypictures.com – I am too busy scoffing to photograph this particular meal!

Fish fingers, waffles (or smiley faces, or alphabites) and beans are one of my favourite “nursery food” meals. A staple on most children’s “will eat” menu, I attempt to treat it as a “treat” however, sometimes, I know think that the treat is for me more than them. Sometimes, when I ask them what they want for tea, I weigh it out “ok boys, what do you want for tea, sweet and sour chicken, OORRRRRRRRRRR Fish Fingers, Windows (waffles) and beans?” I will sing into the back of the car on the way home, mentally counting out the fish fingers onto the baking tray as I change gear.

“Sweet and sour chicken! YAY YAY!” They both sing back at me in the car.

Shit. Because I don’t have any sweet and sour chicken. There was no way on earth I could have predicted at that moment in time, that the children would turn against me and my sudden craving for yellow/orange food which for some reason, tastes even better cold, scraped off two plates and mingled with ‘dippy sauce’. They are amazing.

But then, when it comes to convincing them that that’s what they wanted the whole time, you’ve got to be careful, because if you over egg it, there won’t be any for you, and you don’t want to fall into the trap of cooking more just for you to eat, because that will count as a diet fail, whereas if it’s eaten cold off a child’s plate, whilst encouraging them to continue eating – “come on, eat that fish finger and I’ll eat this one for you” *shovels fish finger and half a mini waffle into mouth* – is actually counted as free calories.

I have never been more disappointed about a child not finishing a meal than when it’s not fish fingers and chips. Or McDonalds.

Same with pizza. We often have pizza on a Thursday night to celebrate handing homework in, and no real after school activities. We crash out with a movie on the sofa with pizza and salady stuff like cucumber and tomatoes (and cheddars) and it’s a lovely tradition we’ve fallen into.  Especially as when I cut them their pizza (I eat later with Mr Aimee) I cut an extra slice for me.  In fact, I’ve been known, if Mr Aimee is out on a work do, to finish all the pizza myself.  Even if it is the very basic of the basics cheese and tomato (with added grated cheese).

Speaking of traditions, we’ve also fallen into baking a cake at the weekend. I used to love doing that with my mum as a child, and I want the kids to do the same, we win both ways because they get to lick the bowl, and I get to inhale cake throughout the week while everyone is at work or school.

GET IN MAH BELLY!

So there you have it, I am stuffing my cupboards with an array of foods we shouldn’t feed our kids (omg, I never used to buy ‘fun sized’ chocolate bars, Haribo or biscuits before I had the kids), and sometimes even they find it too much when, after being asked what’s for pudding, and I say “how about angel delight?” they say “awww I’d rather have a banana”.

This is a co-hosted linky, this month hosted by  Alison over at N
ot Another Mummy Blog</>, who will be handing over to Katie at Hurrah For Gin before it heads over to me and then back to Morgana at But Why Mummy Why.

Don’t forget this  is also a blog hop so make sure you head over and check out the others posts too!.

I really hope you all join in, most of all so that my holiday hasn’t caused me to drink my gin out of the bottle.